For the Dynamite version of the character, see Victor Neuman.

Congresswoman
Director of the FBSA

Claudia Doumit
Victoria Neuman is a major antagonist of the Amazon series The Boys, where she serves as a supporting antagonist of season 2 and will return in season 3.

She was at first portrayed to be a supporting character throughout season 2, until nearing the end of the season when she is revealed to be the so called "Head Exploder", and one of the main (and most dangerous) antagonists of "The Boys".

She is a congresswoman, anti-supe activist and founding director of the Federal Bureau of Superhuman Affairs.

Neuman is a young "wunderkind" congresswoman who is against Vought's agenda and the Superheroes, after the expose of Compound V, She started a rally and pushed the U.S. House Judiciary Committee starting a hearing about Vought and Compound V.

Victoria keeps up with Grace Mallory and certain insiders to get the information and access she needs to take Vought down. She has a big public presence, often leading protests and speaking on the news about the corruption at Vought.

At some point, Victoria meets with Grace who brings her Lamplighter to speak as a witness before Congress about what really happens behind closed doors at Vought. She wants to "bring down the king" and insists that they get more information to accuse Vought. She wants to find more proof about what goes on at the Sage Grove Center.

After Lamplighter dies, Butcher convinces Jonah Vogelbaum to speak before Congress, which really pleases Victoria. However, just before his testimony, Vogelbaum's head explodes after the judge's; along with several other people in the audience. Victoria gets splashed with blood and looks on in horror as Grace drags her away with numerous people dying around them.

It is later revealed that she is a Supe and is the one responsible for the attack at the congressional hearing. Stormfront was later used as a scapegoat for her crimes after her Nazi ties was exposed and her defeat at the hands of The Boys and their allies. She blows up Alastair Adana, the Church of the Collective leader's head. It is unknown at this point if she is acting in the interest of Vought as a form of controlled opposition or if she actually has an agenda of her own. At her campaign headquarters, Hughie asks to join her team. She accepts his offer and asks him when he can start.

Seven on 7 with Cameron Coleman[]

Neuman was a frequent subject on Seven on 7 with Cameron Coleman, whom the news anchor deeply despised. She was featured in clips and interviews. She is revealed to have given Hughie a job as the FBSA's senior analyst. Coleman reported on November 7, 2021 segment, the crackdown on crime has decreased 23% in supe-related violence. In the December 7, 2021 segment, Coleman reported that she and Hughie were attending a Christmas party. 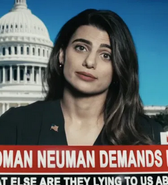