The Female of the Species

"She looked innocent."
"Innocent? She's locked up in a cage, underground, with two armed guards?"
"I had a feeling about her."

Born Kimiko, the Female is one of the main characters in the Amazon series The Boys and a member of the vigilante group, The Boys.

When The Boys find The Female imprisoned in a cage in a basement under high security, they mistake her for a victim in desperate need of saving. But as The Boys unravel the mystery of The Female, they follow a trail of blood and gore to learn that she’s a badass who might just end up saving them instead. And as they’ll discover, the puzzle of The Female’s origins is part of something larger and far more terrifying than they ever imagined.

Not much is known about The Female's history other than at some point, she was a member of the Shining Light Liberation Army, a terrorist group. She managed to escape, however, and was taken prisoner and experimented on with Compound V. The Compound V gave her extraordinary abilities, but left her unable to talk. After an unknown amount of time, The Female is rescued by Frenchie, Hughie Campbell and Mother's Milk, who seem initially scared of her.

From their initial meeting in The Female of the Species there seemed to be a connection between The Female and Frenchie. Frenchie is scared of The Female at first, however warms up to her after she saves him from Black Noir, nearly dying herself, he is deeply saddened to find her bleeding out in the street but is relieved to see her heal.

The relationship between the two develops further, as he becomes one of the only members of The Boys who is able to talk with The Female and calm her down in stressful situations. After an encounter with Mesmer, Frenchie asks if The Female would like to go and find her brother, however she simply hugs him.

In the comics Edit

In the comic series, she is known as The Female of the Species and is an original member of the Boys. She is selectively mute, however, and acts as the muscle of the group along with the Frenchman (Frenchie). She was born in Japan, where her mother worked for a company in Tokyo that was considered the Japanese equivalent of Vought-American. Being too cheap to hire a babysitter, her mother kept her under her desk at work. One day, the baby Female crawled into a laboratory and fell into a pot of Compound V waste, giving her superhuman strength and an urge to kill. After killing the scientist that discovered her, she was captured and kept in a cage, while her blood was frequently extracted in order to study the effects of Compound V on humans. After several failed escape attempts, she was rescued by Billy Butcher and the Boys, and subsequently recruited. Her desire to kill had not gone away, however, so when she is not satisfied with her kills with the Boys, she works for the local Mafia.

"A miracle. You are a miracle." 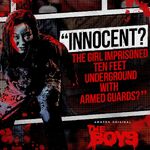 Retrieved from "https://the-boys.fandom.com/wiki/The_Female?oldid=2811"
Community content is available under CC-BY-SA unless otherwise noted.