The Boys Wiki
Register
Don't have an account?
Sign In
Advertisement
in: Characters, Male Characters, The Seven,
and 3 more
English

Edit
watch 01:33
Wiki Targeted (Entertainment)
Do you like this video?
Play Sound

Superhero
Member of The Seven (formerly)
Spreader of Faith

For the Dynamite version of the character, see The Deep/Comics.

"Oh, wow. What a surprise. A water crime. Fuck me running. I swear to God, they only call me when there's trouble at a dock. Or a river or a lake, canal. A jetty. Fucking idiots. I could be doing so much more. But no, Vought just wants me to make my big pretty dives into the water and flash my fucking biceps for Instagram. I mean, sure, four million hits a day, but still, it's fucking demeaning."
—The Deep to Starlight[src]

The Deep (real name Kevin Moskowitz) is one of the main characters in the Amazon series The Boys. He is a superhero, a former member of The Seven and the Church of the Collective. The Deep can breathe underwater and communicate with sea creatures.

Kevin Moskowitz, like all superheroes, was experimented on at birth by Vought American with Compound V. Kevin first became aware of his aquatic telepathy at nine years of age, as he began hearing the thoughts of every aquatic animal he encountered, whether at a pet store, aquarium, beach or the Red Lobster. At first, he believed was going insane; however, his mother deceived him, calling it a gift and that he was just born that way. Overtime his body would continue to mutate, sprouting aquatic gills on his torso, a trait that Kevin was highly insecure about as he believed himself to be ugly and afraid that people would reject him.

Kevin eventually became a superhero known as The Deep, rising through fame and stardom as one of America’s greatest superheroes and a founding member to the world famous superhero team The Seven. However, despite his rising fame his insecurities and shame would only escalate. Over the years, The Deep would sexually harass, humiliate or assault most of the women he encountered as a way to feel less worthless. One year at a VH1 Educator Award Ceremony, The Deep had an encounter with a kindergarten teacher Melissa Dabrowski, who The Deep was suppose to award teacher of the year. While backstage he “fingerbanged” Melissa and abandoned her right after while she was dressing herself, humiliating her.

Over the years, The Deep became good friends with fellow heroes such as Lamplighter, another member of The Seven. Following Lamplighters retirement from hero work, The Deep hosts the debut of The Seven’s newest member and Lamplighter’s replacement Starlight.

"You know something? On my first day, I, uh... well, I-I felt like a fraud. Yeah. But the good news is, everybody feels that way."
—The Deep to Starlight[src]

Although mindful of the fact that Vought has little regard for him, The Deep tells Starlight that he is The Seven's #2, second only to Homelander in importance to the group. He then threatens Starlight with expulsion from the group if she does not perform oral sex on him. Buying into The Deep's ruse, Starlight submits to this blackmail.

The Deep uses this to mock her afterward, however, on advice from Queen Maeve, Starlight is able to move past it and ignore him. When they are on a mission, The Deep mocks Starlight repeatedly, still maintaining the charade of being regarded as second only to Homelander in importance to the team.

Starlight then informs him that she has since learned that the Deep has lied about his importance to the group, and he is, in fact, regarded as "a joke." She further threatens to burn his eyes out if he so much as touches her again. The Deep is visibly shaken by her threats, but tries to maintain a calm façade.

Sabbatical from The Seven[]

After Starlight reveals at the Believe Expo that she was sexually assaulted, Madelyn Stillwell confronts The Deep, correctly deducing he was Starlight's assailant based on his prior history of sexually assaulting women. Vought becomes worried that their stock will dive and they will gain negative publicity for this, leading to them forcing The Deep to publicly apologize to Starlight.

As punishment, Vought sends The Deep to Sandusky on sabbatical from The Seven. The Deep finds this difficult initially, believing himself to be so much more than a small-town hero. He questions when he will return to the public spotlight, however is shocked to find out that Vought does not intend on him returning.

In Season 2, The Deep continues to struggle with coping with his Sabbatical. After The Deep gets arrested, he's bailed out of jail by Eagle the Archer who offers to help him build his reputation back. With the assistance of Carol, a member of the Church of the Collective, The Deep is given medication that allows him to communicate with his body. At first he rejects his body until his gills tell The Deep that he deserves to be happy and to be loved, but must learn to love himself. Furthermore, Carol promises Deep if he continues to follow the process, he'll be worthy of rejoining The Seven. Eventually the Deep participates in a planned marriage by Carol in order to help him gain the right kind of public attention. At the end of We Gotta Go Now, Queen Maeve approaches The Deep and makes him an offer: He helps her with a favor, and she'll help earn the Deep more positive publicity. The Maeve's conditions in the deal are revealed in The Bloody Doors Off, she wants The Deep to search the wreckage of Flight 37 for footage of her and Homelander leaving the passengers to die. He returns and hands her a damaged GoPro camera with footage of a man recording Maeve and Homelander debating with each other on whether or not to let all of the passengers die. While at the movie set, he attempts to recruit A-Train and offers him lunch with him and the chairman, Alastair Adana. There the two attempt to recruit A-Train as a member. Eventually A-Train joins because Adana has information on his abuse of Compound V. At Alistair's birthday party in Butcher, Baker, Candlestick Maker Deep and A-Train bond, with A-Train giving Deep a pet fish and apologizing for harassing him in the past. Alistair arrives and says he arranged a meeting with Stan Edgar promises them both they will get back into The Seven. Alistair then questions them on their opinion on Eagle the Archer. Deep first calls Eagle his friend, however he changes his mind quickly and berates Eagle the moment Alistair calls Eagle a toxic personality. A-Train and Deep are seen in a bar at the end of the episode. There, they watch a news article with Eagle admitting that he was kicked out the church because he refused to the follow the program which would've "required" him to cut all ties with his mother. To the shock of A-Train, Deep still chastises Eagle. A-Train asks Deep why he is so quick to turn on the man he once called a friend. Deep ignores A-Train and asks the bartender to change the channel to the Congressional Hearings. Deep and A-Train can only watch as the courtroom is massacred. Deep grasps his head to check if it's going to explode too, to his relief it doesn't.

—The Deep Leaving The Church of the Collective[src]

Deep and A-Train do meet with Alistair in What I Know, from there, Alistair reveals he knows A-Train broke into the archives room and stole information on Stormfront. Deep chastises A-Train in an attempt to win positivity with Alistair, however. Alistair reveals it was a positive thing and thanks to A-Train's efforts in removing Stormfront, A-Train is allowed back into The Seven. The Deep once again changes his attitude and congratulates A-Train. Deep asks if he's also back in, but Alistair says Vought refused him because "One hero is a redemption, two is weakness." Deep is furious with the church because of this and begins criticizing The Church. Alistair then calls him toxic so Deep insults him one last time before storming off.

The Deep is later on referenced by Vought News Network anchor Cameron Coleman, who says that after abandoning the Church, the Deep started openly criticizing and making allegations against it, accusing it of psychological manipulation, corporate corruption and “an unholy obsession with Fresca”, especially Adana, who once again was “unaccounted for” (due to being murdered by Victoria Neuman for blackmail shortly after Deep’s departure from the Church).

"You're just the fish guy."
—Starlight[src]

"Vought just wants me to make my big, pretty dives in the water and flash my fuckin' biceps for Instagram"
—The Deep to Starlight[src]

In his first appearance, The Deep was presented as unethical and manipulative. Aware of Starlight's youthful infatuation with him, he falsely claimed that he was second only to Homelander in importance to The Seven, and threatened her with expulsion from the team unless she performed oral sex on him.

During his tenure with The Seven, The Deep seemed mindful of the fact that he was regarded as the least valuable member. He complained to Starlight that Vought only wants him to make "pretty dives" and show off his biceps. He also became belligerent when Starlight, having learned that The Deep lied to her about his importance to the group to coerce her into sexual acts, angrily told him "everyone thinks you're a joke."

The Deep also felt no remorse over having manipulated Starlight in this way, even mocking Starlight and openly contemptuous of her indignation. He eventually apologized, but only when forced to.

When he was involuntarily placed on sabbatical and became involved with Church of the Collective, his desperation to be accepted back into The Seven caused him to adopt an obsequious, almost servile attitude toward the Church's Chairman Alastair Adana. More than once, Deep has been known to instantly flip his perspective on a person when he realizes Alastair takes a differing view. For instance, when Alistair reveals that A-Train had stolen the Church's PDR (Private Data Reserve) file on Stormfront, Deep responds in outrage over the theft. But when Alastair commends A-Train's "initiative" and that he is now back in The Seven, Deep at once becomes congratulatory towards A-Train, despite having disavowed him only seconds earlier. Furthermore, when Alistair asks him about his opinion on Eagle the Archer, Deep first calls Eagle a friend and the man who saved him. However, the moment Alistair interrupts calling Eagle toxic, Deep sides with Alistair and denounces Eagle.

His devotion to the Church is such that he even signed over his bank account to Alastair. He married his current wife against his own preference at Carol's insistence.

But Deep's sycophantic nature has its limits. When he learned that A-Train, whom Deep recruited to join the Church, has been re-accepted into The Seven while he was not, he storms out of Alastair's office in a rage, apparently quitting the Church.

The Deep is also self-conscious about the presence of gills on his torso. While this adaptation allows him to breathe underwater, he is keenly aware that most find them repulsive and is extremely reluctant to bare his torso because of this. Deep is made to confront his revulsion during his time with the Church with a drug-induced hallucination where his gills seemingly have developed autonomy and are capable of speaking to Deep. In his hallucinations, Deep's gills suggested that his shame over his own body (due to the presence of gills) prompts him to violate women's bodies.

The Deep is very fond of receiving unreciprocated oral sex, even preferring it to coitus. Perhaps his self-consciousness regarding his gills has guided this preference. He blackmails Starlight into performing oral sex on him, and his complaint about his wife is that she "gives terrible blow jobs." 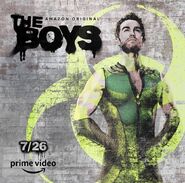 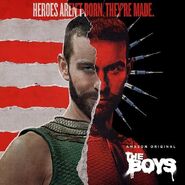