"With great power comes the absolute certainty that you'll turn into a right cunt. I mean, that's the thing, right? You're all just people. All the V does is just amp up all that shit that's already inside. Your lot? Just a bunch of walking nuclear erections. You know? A-And it's not just Homelander. I mean, you-you fucking all got to go. Every fucking last... one of you."
—Billy Butcher to Queen Maeve[src]

The first season of The Boys premiered on July 28, 2019 on Amazon Prime Video. The second season premiered on September 4, 2020. The third season was announced before the Season 2 premiere and premiered on June 3, 2022.

The Boys is an irreverent take on what happens when superheroes, who are as popular as celebrities, as influential as politicians and as revered as gods, abuse their superpowers rather than use them for good. It's the powerless against the super powerful as The Boys embark on a heroic quest to expose the truth about "The Seven," and their formidable Vought backing.

The third season was announced in August of 2020.

Between 2008 and 2016, a film adaptation of The Boys had been in various stages of development at both Columbia Pictures and Paramount Pictures.

On April 6, 2016, it was announced that Cinemax was developing a television series adaption of the comic book. The production was being developed by Eric Kripke, Evan Goldberg, and Seth Rogen. Kripke was set to write the series while Goldberg and Rogen were set to direct. Executive producers were reported to include Kripke, Goldberg, Rogen, Neal H. Moritz, Pavun Shetty, Ori Marmur, James Weaver, Ken Levin, and Jason Netter. Garth Ennis and Darick Robertson were set as co-executive producers. Production companies involved with the series included Point Grey Pictures, Original Film, and Sony Pictures Television.

On November 8, 2017, it was announced that Amazon had given the production a series order for a first season consisting of eight episodes. The series had reportedly been in development at Amazon for a number of months preceding the series order announcement. It was also reported that the previously announced creative team was still attached to the series.

Kripke wanted to retain a sense of reality to the show, and to keep the writers disciplined decided "Anything that comes out of this drug is viable, and anything that doesn't we're not allowed to do". He did not want to fall into the overused convention of killing off female characters to motivate the heroes and also saw an opportunity to surprise readers of the comics by changing the story of Butcher's wife Becky.

On April 30, 2018, it was announced that Dan Trachtenberg would direct the series' first episode. He replaces Rogen and Goldberg who dropped out due to scheduling conflicts.

Ahead of the series premiere, on July 19, 2019, it was announced that Amazon had renewed the series for a second season. The eight scripts for the second season were completed by November 2019.

Ahead of the second season premiere, on July 23, 2020, Amazon renewed the series for a third season at the aftershow hosted by Aisha Tyler for San Diego Comic-Con@Home.

On Rotten Tomatoes, the first season holds an approval rating of 84% based on 98 reviews, with an average rating of 7.72/10. The website's critical consensus reads, "Though viewer's mileage may vary, The Boys violent delights and willingness to engage in heavy, relevant themes are sure to please those looking for a new group of antiheroes to root for." On Metacritic, it has a weighted average score of 74 out of 100, based on reviews from 19 critics, indicating "generally favorable reviews". 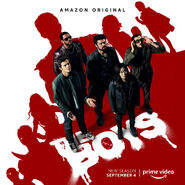