The Boys is an American superhero-drama comic series created by writer Garth Ennis and artist Darick Robertson. The series was initially published by Wildstorm Productions, an imprint of DC Comics, until the sixth issue, when the book was canceled and the rights to the story and characters were reverted to the creators, allowing them to continue the series through an independent, lesser-known comic publisher, Dynamite Entertainment, starting with the seventh issue continuing through to the seventy-second.

The series created a few spin-off miniseries during its original run, including Herogasm, Highland Laddie, and Butcher, Baker, Candelstickmaker, all published by Dynamite. In 2020, the book received a sequel miniseries in the form of The Boys: Dear Becky.

Praised repeatedly and in huge quantities for its excellent social commentary, fascinating characters, unique tone, and brilliantly cruel humor, The Boys enjoyed huge critical success and a decent commercial one in its seventy-two issue run from 2006 to 2012, and its spin-offs continue to turn a profit. A film adaptation was in development for years, but after it fizzled out and died, its death spawned an adaptation in the form of an original series from Amazon Prime Video. The show was renewed for a second season days before the release of its first and was renewed for a third a month before its second even premiered. Two spinoffs were later greenlit. One of them, called The Boys Presents: Diabolical aired in March of 2022. It included the episode I'm Your Pusher, which featured an original story written by Garth Ennis set in the world of the comics rather than the main tv adaptation.

The series starred the Boys, a CIA-backed group of operatives whose job was to manage and, if need be, kill supes. The team was comprised of Wee Hughie, Billy Butcher, the Frenchman, Mother's Milk, and the Female. The book followed their continued efforts fighting The Seven and Vought American

The Boys is an irreverent take on what happens when superheroes, who are as popular as celebrities, as influential as politicians and as revered as gods, abuse their superpowers rather than use them for good. It's the powerless against the super powerful as The Boys embark on a heroic quest to expose the truth about "The Seven," and their formidable Vought American backing. 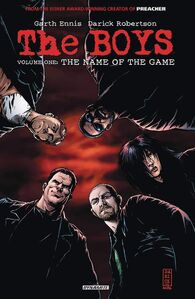 The Boys, Volume One:
The Name of the Game 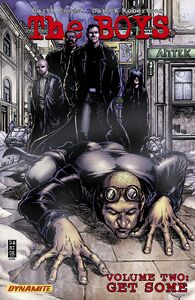 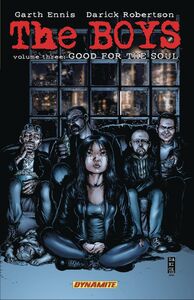 The Boys, Volume Three:
Good for the Soul
October 1, 2008
Issues 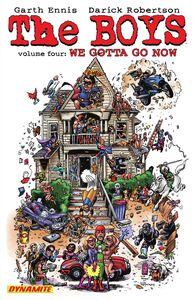 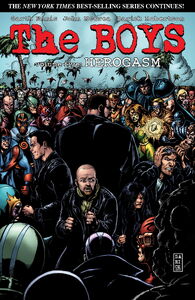 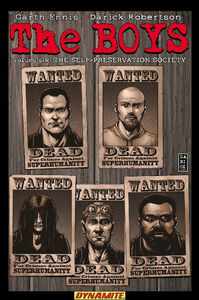