The Bloody Doors Off

"The Bloody Doors Off"

"The Bloody Doors Off" is the sixth episode of the second season of The Boys. The episode was released on Amazon Prime Video on September 25, 2020. It is the fourteenth episode overall.

When The Boys and Starlight follow a lead to Vought's mysterious Sage Grove Center, they find one of Vought's darkest secrets - and someone even darker from their past. Meanwhile Homelander and Stormfront's relationship deepens.

In a flashback from eight years ago, Frenchie, Cherie, and Jay smoke and laugh together about The Golden Girls. Frenchie asks, “Now, who wants to rob a bank?”

In present day, Starlight talks to Frenchie and Hughie about taking her chip out, fearing repercussions from Stormfront. The process is a success, with Frenchie successfully removing the chip from her neck.

Starlight goes to The Boys’ hideout and tells them about how she broke into Stormfront’s laptop and saw dozens of emails between her and Stan Edgar, specifically about how they’re close to a break through at the Sage Grove Center.

The Deep goes into Maeve’s trailer and tells her that he hasn’t found the black box to the flight that went down (no thanks to Homelander). He does however give her a GoPro camera that he found and she tells him to stay quiet if he wants back in The Seven. On his way out, The Deep runs into A-Train and tells him if he needs help, he might have the way while offering him a Fresca (via the Church of the Collective).

In another flashback, Grace Mallory interrogates an arrested Frenchie at a police station. She confronts him about his armed robbery charges which will land him 25 years in prison. Impressed with his engineering ability to counter a Supe's power, she offers an alternative- to work for her instead. Frenchie denies the offer, so Grace makes him a new one. She threatens to lock up his friends, Cherie and Jay, at a Super Maximum security prison unless he works for her. He resists but ultimately agrees.

At the Sage Grove Center, The Boys meet out front and put on nurse scrubs to sneak in. Starlight makes a hole in the fence for them to get in while Butcher, Starlight, and Hughie agree to stakeout the place. They sneak in successfully. Billy then aims his rifle a Starlight's head but ultimately refuses to pull the trigger again. Starlight then incites an argument with Butcher by asking why he hates Supes so much. She then incites him further by comparing him to Homelander, but before the two can continue they are interrupted with the arrival of Stormfront, who flies into the center. MM, Frenchie, and Kimiko kill a guard and break into the surveillance room. There, they see video screens monitoring residents, aka Supes in the making.

Stormfront talks to a patient, Tim, who asks to see his sister. He seems more like a prisoner and just asks to see his family. He threatens not to do any more tricks until he does. Stormfront agrees and walks away. The nurse, aka Lamplighter posing as a nurse, blasts him with fire. The Boys watch everything go down on the video monitors and realize the nurse is Lamplighter.

The Boys steal files from the control center. The moment Stormfront leaves, Butcher radios for them to escape now. They attempt to walk out but Frenchie and Lamplighter make eye contact. Lamplighter recognizes him and lights his lighter, as a threat. Frenchie jumps up and pushes him away and he accidentally lights the wall on fire, letting one prisoner/patient, Cindy, out of her cell.

Lamplighter tries to plead with Cindy to let him live, while The Boys try to convince her they're on her side, but before Cindy can choose who to believe, a guard arrives and shoots Cindy in the back. Infuriated, she crushes him with her mind. She then opens all the cell doors, letting all the Supe prisoners out. The Boys and Lamplighter run and lock themselves back in the control room. Lamplighter threatens to burn them but MM tells him that Kimiko is a Supe and that that will just piss her off. Stuck in a standoff, they ask each other the plan. Lamplighter reveals there is an override for the lockdown, however he refuses to let them escape. M.M reasons that he needs them to protect him from the patients out there who want to kill him, but Lamplighter refuses the offer.

The Acid Vomit Patient arrives and knocks Lamplighter down, almost melting his face. However, Kimiko saves Lamplighter from the patient, and so he agrees to let them come to the front to get the access code to leave the facility.

An escaped patient pleads with Butcher and Starlight to not let him get hurt. Bitcher attempts to reassure the man, but he attacks Starlight, Butcher, and Hughie with a shock wave like EMP blast generated from his chest, knocking Annie and Billy back while sending the van flipping multiple times. Butcher kills the man, as the two check on Hughie, who is hurt badly after having been impaled with a piece of shrapnel. They attempt to cauterize the wound, but the EMP wave knocked out all nearby electrical sources for Starlight to draw energy from. So they leave the other members behind in the facility and rush to get Hughie medical help.

Homelander, feeling abandoned by Stormfront, burns down his trailer in anger. Finally, Stormfront shows up and Homelander accuses her of lying. She claimed she went to meet with her social team but he said he went to the Tower to check on her, but she wasn’t there. Annoyed with her repeated excuses, Homelander almost chokes her, but stops himself.

A-Train has lunch with The Deep and Alastair Adana at the Church of the Collective. Alastair calmly threatens A-Train to stay and join the church, telling him that he knows about his past. Alastair convinces him too that he can help him stay in The Seven. He tells him that he needs to let The Deep tell him his "truths", aka how he felt anger towards him for most of his career. A-Train reluctantly agrees.

In a flashback from five years ago, MM shows Frenchie an engagement ring and tells him and Grace that he plans to propose. Lamplighter shows up with a torch and leather hooded robe which Butcher found amusing. Grace tells Lamplighter that he will tell them everything that happens at The Tower, seemingly threatening him with some photos. Suspicious of him, Mallory orders Frenchie to follow Lamplighter. Frenchie agrees to track Lamplighter and races after him.

In present day, Starlight hails down a car and asks for help to get Hughie to a hospital. The man then threatens Butcher with a gun and Starlight uses her powers to push him away, accidentally killing him. They get in the car and drive Hughie to a hospital. He gets the care he needs, but will be laid up for a couple of days. Butcher and Annie bond as they agree that neither is good enough for Hughie

At the Sage Grove Center, Lamplighter tells Frenchie that he didn’t know that children were in the bed when he set it on fire. He meant to burn Grace Mallory, not them. Lamplighter asks Frenchie why he didn’t stop him, since he was following him that night.

In another flashback, Cherie calls Frenchie and tells him that Jay is dying from an overdose. Frenchie, who was supposed to be following Lamplighter, runs to be with his friends. He helps revive Jay. That’s why he wasn’t with Lamplighter that night when he burned the children.

In present day, Lamplighter explains what they’re really doing at Sage Grove Center. He tells them that they’re trying to make Compound V better so that any adult can be a Supe at any time.

Love Sausage’s dick breaks through the window and chokes MM. Kimiko pushes through the door and knocks out Love Sausage with her brass knuckles. Cindy approaches them but Stormfront enters the facility and electrocutes her. Lamplighter saves The Boys by lying to Stormfront about the cause of the chaos. She orders him to clean up the mess, then leaves.

Elena finds the camera that The Deep gave Maeve in her apartment, showing Homelander and Maeve abandoning everyone on Flight 37. Elena is horrified but Maeve tells her that she plans on blackmailing Homelander to leave them alone or she will go public with it.

MM, Frenchie, and Kimiko bring Lamplighter to Grace Mallory in a stolen ambulance. Lamplighter tells her that he wanted to come to see her. He tells her to shoot. Frenchie intervenes and begs Mallory to spare his life. Which she reluctantly does.

Stormfront comes clean to Homelander about her past. She tells him she was born in 1919 in Berlin and had a daughter who grew old and passed away. She shows him a wedding photo of her and Frederick Vought in front of a Nazi flag. She had her daughter with Vought and he gave her the first successful V injection. She tells him that they are in a race for their culture. That the other races are grinding them down.

Stormfront then tells Homelander that he will be the man to lead the new superhero army. She tells him that she loves him with all of her heart. Homelander passionately kisses her.

Cindy survived the electrocution and hitchhikes along the highway.

"I just killed six subjects out there like a teddy bear picnic."
—Stormfront

"Underneath all that swagger, you’re just a bigot and a bully."
—Starlight to Billy 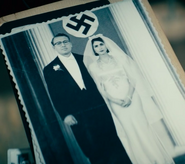