The Boys Wiki
Register
Don't have an account?
Sign In
Advertisement
in: Article stubs, Comic characters, Deceased,
and 2 more

< Terror
View source
Our community needs more information on this page! Can you help out? Click here to add more.

For the Amazon version of the character, see Terror.

Terror is a vicious bulldog that belongs to Billy Butcher. He somehow has been trained to sexually violate things on command. Otherwise he's a good doggy, except when he discreetly pees on the legs of the Homelander, the Ultimate Supe. All members of the Boys get on well with the lovable Bulldog, even the Female who shares an intolerance to contact with most, will affectionally scratch and play with Terror.

At this stage it is unknown if Terror has received an injection of Compound V, the serum providing superpowers. Based on the fact that the writer is Garth Ennis, it could well be possible. Evidence from when Terror took a giant chomp out of the Crimson Countess' arm supports this theory.

It is too be noted that Butcher is extremely protective of Terror, despite the dog following him nigh everywhere and the nature of his work, there are few times when he tells Terror to run from the danger at present. Butcher also takes great offense to those that harm or threaten to harm Terror, as seen with Crimson Countess, and his meeting with Homelander in which the Truce between The Boys and The Seven is almost broken. After Butcher releases information on Jack from Jupiter, Black Noir kills Terror at the Flatiron building, with Butcher, assuming the killer to have been Jack, then killing him. 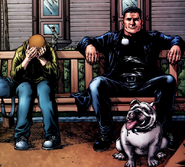