For the Amazon version of the character, see Tek Knight.

Tek Knight (real name Robert Vernon) was a member of Payback who struggled with his sexual psychosis.

Tek Knight is a founding member of the super-group, Payback. Prior to his association with Payback, he previously led a group known as the Maverikz (who in turn were savagely beaten by The Boys in issue #31). The current Tek Knight is actually the third person to hold the identity. Two prior incarnations of Tek Knight, originally called Steel Knight, were introduced in Issues 52 to 54, as well as prior versions of sidekick Laddio. Mallory says they revamped his "franchise" later. Issue #9 gives his name as Robert Vernon. He is also one of the few Supes that have no powers, relying on technology instead. In recent years, Tek Knight has developed a psychological problem, which causes him to have spontaneous sexual relations with both living creatures and inanimate objects. Tek Knight is one of the primary suspects in the murder of Steve Rubinstein, but is revealed to be innocent. He eventually saves the planet by having sex with a giant asteroid hurdling towards Earth, causing it to explode. Fortunately, Tek Knight also dies in the explosion. In truth, he was actually killed by a falling wheelbarrow and he hallucinated saving Earth from a meteor. An autopsy revealed Tek Knight had a large tumor on his brain, explaining his bizarrely perverted behavior.

Tek Knight was one of the few heroes to never engage the Boys' attention, as he never did anything depraved or morally wrong like many other "Heroes". Butcher describes him as boring, and seemed to be a genuinely nice person, though highly homophobic. Soldier Boy states in Herogasm that he was one of the only members in Payback to be nice to him. 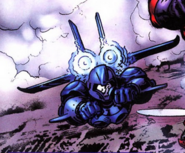 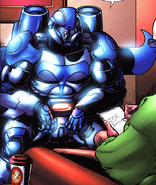 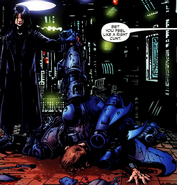 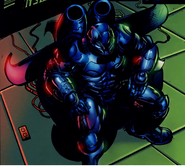