The Boys Wiki
Register
Don't have an account?
Sign In
Advertisement
in: Characters, Female Characters, The Seven,
and 8 more
English

For the Dynamite version of the character, see Starlight/Comics.

Associate of The Boys

"The Name of the Game"

"Here Comes a Candle to Light You to Bed"

"You're right. This whole place. I'm so fucking tired... of listening to people to tell me I need to be shitty in order to win. Fuck you. And fuck Homelander, and fuck Vought and this "whatever it takes" crap. You're just gonna end up sitting of the steaming pile of shit that you built. I'm done. I'm fucking done. I'm not doing it anymore. So, either pop my head or get the hell out. "
—Starlight to Victoria Neuman.[src]

Annie January, formerly known as Starlight, is the deuteragonist of the Amazon series The Boys. She's a member of The Seven, a group of superheroes. She was briefly excommunicated from the group after she was discovered to be a mole and ally of The Boys.

Annie January is as down-to-earth and sincere as they come, the girl next door with superpowers. And as Starlight, "The Defender of Des Moines", all she's ever wanted to do is save the world — and while a lot of people say that as a corny catchphrase, she actually means it. So, when she's selected to join The Seven, it's every dream she's ever had come true.

However, that dream becomes her worst nightmare when this fresh-faced Midwesterner arrives in New York and learns that the old adage is true: never meet your heroes.

Starlight has had a history of being in the spotlight, often attending superhero events as a child, she is selected to be a member of The Seven after interviewing following Lamplighter's retirement. She is at first rejoiced at being selected, however is sexually assaulted when the Deep extorts her into performing oral sex on him in The Name of the Game.

Her membership with The Seven comes with a price, however, as she is forced to disregard her morals in return for Vought International profit. She initially disregards Vought's attitude towards fighting criminals, dismayed at having her patrols arranged for her in Cherry, she deviates from the path after saving a woman from two assailants — much to Vought's initial anger, however, is praised after it gains positive publicity for The Seven.

Starlight eventually strays from her path as a member of The Seven during the Believe EXPO, in which she expresses her anger at Vought and the world in general. She is soon made to realize, however, that membership with The Seven comes at a price following threats and warnings from Homelander.

Hughie and Starlight form a close relationship shortly after the former's girlfriend's death. Initially, Hughie engages in the relationship to plant a bug on Starlight's phone, however the relationship develops into a romantic/sexual one. Starlight is angry and upset that Hughie begins using her to get tickets into the Believe Expo in Good for the Soul, and again to gain information on Naqib. The relationship between the two does fix itself to a degree, however, with Starlight rescuing Hughie from A-Train in You Found Me.

In the second season, Starlight works closely with The Boys to help bring down Vought. She even steals a sample of Compound V to have proof that Supes aren't born, they're made. Homelander and Stormfront are onto her and eventually Annie gets denounced as a criminal and publicly announced as a traitor of The Seven. She gets imprisoned in Vought Tower, but Hughie helps break her out and they start to bond again.

At the end of the season, Annie fights Stormfront after helping to reveal her Nazi past. She gets reinstated into The Seven and cleared of criminal charges once the world realized that Stormfront was the bad guy and Annie was just trying to help.

Annie and Hughie reconnect and kiss at the end of the season. It is implied that they're in a relationship again.

Seven on 7 with Cameron Coleman[]

Starlight was featured in a music video titled Never Truly Vanish and in various segments, interviews and advertisements across the VNN channel, including reports of her ex-boyfriend Supersonic making a name for himself again after their former relationship (when his name was Drummer Boy.) In the October 7, 2021 segment, Coleman reported that Starlight was rebuilding her image and has donned her old costume, which prompted Halloween sales to reach Homelander's levels of popularity. In the December 7, 2021 segment, Coleman reported that she was a guest at Vought's Christmas benefit, recognized as Hero of the Year.

On January 7, 2022, Coleman reported that Starlight was exclusively looking for new members of the Seven to join their team, and would be a host of the reality competition show American Hero.

In Season Three, Annie's ratings are off the charts for her work in The Seven. Her wholesome appearance is really well received and Stan Edgar notices. He makes her co-captain of The Seven, with Homelander, and Annie is very hesitant at first. She thinks she could be a role model for young girls around the world but she also thinks Homelander is deranged and will murder her if she moves in on his leadership role. Annie decides to take the position in the end.

Annie is in a strong and stable relationship with Hughie- they are also in a public relationship. However, Homelander announces that he and Starlight are actually together and Annie keeps up the charade to keep Homelander happy.

Her ex-boyfriend, Supersonic, joins The Seven and they strike up a friendship again. He agrees to help her try and take down Homelander because he knows she needs an ally. However, A-Train betrays Supersonic when he tells him the plan and Homelander kills him. Homelander flies Annie to the rooftop where he killed Supersonic and he shows her that if she keeps plotting against him that the same gruesome death will happen to Hughie. Annie tells him she understands.

Not too long after, Starlight, Homelander, Ashley, and her assistant Ashley go over the reports of a Supe causing an explosion that left a hole in a building and at least 19 people dead. Starlight expresses finding and stopping the attacker, but a scared Homelander tells her that he must tell the public that everything is fine and the attack is a hoax, much to her anger.

Annie later tells Hughie about Supersonic's death, which he reveals that the Boys unleashed Soldier Boy back in Russia, as well as Hughie having taking Temp V and acquired teleportation powers, much to her shock. The couple argue, with Hughie expressing relief that he can finally fight, but Annie expresses her outrage of him using an untested drug on himself and not wanting to lose him to the power rush.

MM calls her one night, telling her to come to Crimson Countess' location. There, she finds him knocked out by a sedative given by Butcher, with Hughie surprised that she's there. Taken away by Hughie, Annie is shocked by Hughie's display of powers, saying that he promised not to do it again earlier. He tells her that he wants no more secrets between them, but soon after, they are interuptted by an explosion coming from Crimson Countess' trailer. The two rush over to find Soldier Boy emerging from the ruins, his former team member and lover burnt to a crisp. She is stopped by Hughie before trying to blast Soldier Boy, to which she realizes that he and Butcher are working with the former hero to finally take down Homelander. Annie conveys to Hughie that Soldier Boy has killed people, but he refuses to listen, and leaves Annie alone with Soldier Boy and Butcher.

Annie keeps teaming up with MM and argues with Hughie who is trying to use Soldier Boy. After Victoria Neuman asks Annie to team up, Annie decides she's done with playing dirty. She decides to record a live message on social media, quitting The Seven, calling out Homelander, and telling the public the truth about Soldier Boy and the threat he poses.

At her core, Annie is an idealist and one of the very few "Supers" who truly care about helping others and doing what she believes is right. She cares little for publicity being uncomfortable with the amount of attention she gets from the media as well as being pressured to change her costume to be an over-sexualized role model for young girls. She also suffered from imposter syndrome during her early time as a member of the Seven, as she had yet to perform any notable heroic acts.

After being sexually assaulted by The Deep, Annie felt disgusted with herself due to doing things she never considered part of herself and something a superhero would do and began to doubt about the image she used to see of herself, but after a conversation with Hughie she regains her self-confidence and begins to be braver being capable of confronting others, like when she threatened The Deep to stay away from her otherwise she would use her powers against him. She also starts to defy orders from her superiors, refusing to accept her new costume going against Madelyn Stillwell, Annie also doesn't stay quiet anymore and begins to be herself and not following orders. However, when she finds out about the existence of Compound V and that Hughie initially wanted to get information she feels completely betrayed, disappointed, frustrated and pissed off because he was the only real good thing that happened to her in her time at The Seven, she is also angry with her mother due to lying her about the truth behind her superpowers stating her whole life has been a complete lie. But she eventually leaves those feelings behind and decides to do what she believes is correct by rescuing The Boys and helping them to take down Vought working as an informant and ally.

With the passage of time Annie develops a hardened, more cynical personality, having been exposed to the unethical dealings with Vought. She is willing to use methods she would have previously not tolerated in her vendetta against Vought. Without any hesitation, she blackmailed A-Train by threatening to disclose his murder of Popclaw and his abuse of Compound V. She also blackmailed Gecko, who believed she was a friend, to get a sample of Compound V. When she accidentally killed Dennis, she confessed that in the past she would've cried, but at that moment she only was pissed off at him because he was in their way. Despite this, Annie never becomes as corrupted as her teammates in The Seven and still adheres to her ideals.

Annie was Christian, but is not extreme in her beliefs as shown when she attends a Christian carnival and is disillusioned by the homophobic propaganda. This led to her questioning her faith and not caring about it as much.

In season 3, Annie still continues helping The Boys to take down Vought. However, she's been shown to feel very terrified with Homelander noticing his mental stability is now more deranged than ever as seen when he arranged the return of The Deep, falsely claimed that he and Annie are "in love of each other" and when he killed Supersonic. Annie knows he has to be stopped somehow, but she also doesn't want to lose Hughie, feeling completely cornered with no clue how to escape from that position. These feelings have become worse after realizing Hughie is taking V24 and he lied to her about using Crimson Countess as a bait to ally with Soldier Boy and use him to kill Homelander, straining their relationship.

"You know how you have this... image of yourself? Like, I thought I was strong. You know? Like, made of steel. A fighter."
—Annie January to Hughie Campbell[src] 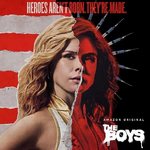 Why Starlight Is A True Superhero - The Boys - Prime Video