TBA
The third season of The Boys was greenlit by Amazon ahead of the series' second series release. The first three episodes of the season will air on June 3, 2022.[1] 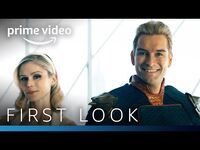