The Boys Wiki
Register
Don't have an account?
Sign In
Advertisement
in: Characters, Female Characters, The Seven,
and 7 more
English

Edit
watch 01:40
Boba Fett Returns - The Loop
Do you like this video?
Play Sound

Member of The Seven

For the Dynamite version of the character, see Queen Maeve/Comics.

"The truth is, our weakness is the same as anyone's. It's people. The people we care about. So I say, cut them loose. For your good and for theirs. That way you're really bulletproof."
—Queen Maeve[src]

Queen Maeve (real name Margaret "Maggie" Shaw[1][2]) is one of the main characters in the Amazon series The Boys. She is a superhero and a member of The Seven.

As a warrior, a feminist, a humanitarian, and second most powerful member of The Seven, Queen Maeve is the ultimate role model for little girls all over the world. But to reach such astonishing heights, she's had to make sacrifices along the way. Embracing the image that Vought demanded she accept meant abandoning the truths – and even some of the people – she held dear.

Disillusioned and cynical, she's now a shell of the determined idealist she once was, although she is regaining some of what she once was when she came to the aid of The Boys against Stormfront and Homelander.

Throughout Season 1 of the TV show, Maeve is typically shown at Homelander's side. In the first episode, Maeve successfully stops an armored truck and the men inside. As she is about to subdue the final criminal, Homelander comes in and receives all the credit. In episode 3, its revealed that Maeve and Homelander used to date one another, and there is still some lingering affection from the latter. However, in episode 4, when she fails to rescue a hijacked plane, she is psychologically broken.

In episode 5, we get more backstory when she, drunk, looks for a hookup and consolation in her ex, Elena. Furthermore, in episode 6, Elena shows up to Maeve's work, trying to care for Maeve. The newspeople take note that Elena is Maeve's ex and that she's interested in women. This could pose a problem for Maeve in the future. In episodes 7 and 8, Maeve seemingly builds her relationship with Starlight by defending her and preventing her from turning into a shell of herself.

In order to get Elena and her to out themselves as a couple, Ashley and other world officials tell them what they should look like as a lesbian couple. Elena then makes it clear that Maeve is bisexual and also that she doesn't want to take part in that whole public relationship thing. Maeve convinces her to play along as she still is afraid Homelander will do something to Elena. Later she goes into a deal with The Deep in which she shall help him to get his image back, if he helps her find dirt on Homelander. This is later revealed that she hired Deep to search the sunken wreckage of Flight 37 to find a video recording of Homelander abandoning the passengers to die. The Deep returns with a damaged GoPro of a husband recording the incident of Maeve and Homelander debating on how to save the prisoners, showing Homelander threatening the passengers and ultimately leaving them all to die. Elena finds out about the video, and confronts Maeve with it, who tells her that it is their leverage against Homelander. Elena tells Maeve that she gets nightmares about that video, and has decided to go to her sister's house. She tells Maeve that she does not blame her for what happened on the plane.

At the end of the series, Maeve is given an opportunity to do right instead of wrong. She helps The Boys deal with Stormfront and Homelander and even threatens to upload the video of him leaving all of the people on Flight 37 behind to die if he doesn't give into the following demands: let Billy Butcher and Ryan walk away safely, stop hunting down Starlight, and leave herself and Elena alone. Homelander caves from his weakness in his desire to be loved by the world and gives into her demands. Maeve was right next to Starlight when Homelander begrudgingly welcomed her back to the Seven at a press conference, completing Maeve's victory over Homelander.

Queen Maeve's public image is that of a warrior, a feminist, a humanitarian and role model, but, in reality, is a generally apathetic, withdrawn, disillusioned and cynical person.

She was once a determined idealist, but has since become (mostly) complacent in the corruption of the Seven and the Vought corporation, remaining quiet on the sidelines despite being the second most powerful member of the Seven behind Homelander. Maeve is also heavily implied to be an alcoholic.

Despite this she is (with the exception of Starlight) the least malicious super-powered individual seen so far in the series. She genuinely wants to save people even though her experiences have left her jaded and cynical, she at least tries to actually be heroic when possible. She has also shown to be more self-aware than the rest of her team, recognizing that she and the Seven are not true heroes. She also noticed Starlight's distress after her assault and offers some comfort.

Queen Maeve plays a conservative role within The Seven. She is always portrayed at Homelander's side, and the two have past relationships. This relationship, however, becomes strained throughout season one. Queen Maeve first uses the relationship to sway Homelander in The Female of the Species, pleading with him to help save the hijacked flight, however she is unsuccessful in her efforts. The relationship is tested again, as Maeve tells Homelander to back off Starlight, with him remarking that he will because she asked. According to a deleted scene, the pair broke up due to Homelander "not being able to keep it in his tights". The two only grow more hostile towards each other in Season Two when Queen Maeve attempts to secretly revive her relationship with her former girlfriend and worried that Homelander will find out the truth and kill Elena. Despite her attempts, Homelander finds out the truth about Elena and Maeve so in an interview with Maria Menounos, Homelander "sets them both free" by revealing Maeve's relationship with Elena. However, this ends up being just a form of manipulation and humiliation, by Homelander. She begins to become fearful that he will kill Elena at any moment. With him forcefully outing her as a lesbian, even though she isn't one, it completely changed her image, with Vought now trying to completely change her and rebrand her, once again he takes power over her life.

Maeve was finally able to end Homelander's manipulation and control, by blackmailing him with the footage that was captured of their failed attempt to save the plane. She was able to end his control over her relationship, have him end the hunt for Starlight, and force him to let Butcher and Ryan flee to safety.

Queen Maeve is bisexual, which is revealed in episode five of season one. Her true love is named Elena, and it's revealed over the course of the show that the pair dated until Maeve moved onto Homelander. It is evident that Maeve still has lingering feelings for Elena, as she had a late-night hookup with her, rushed to the hospital when her appendix burst, and was prepared to attack Homelander if he hurt Elena (when he revealed that he found out the truth about them). Maeve and Elena's relationship was closeted until Homelander outed her.

Queen Maeve is the only member of The Seven that Starlight has a quasi-positive relationship with. Maeve advises Starlight to be authentic in the first season after Starlight questions her membership with The Seven and Vought's morals. Maeve admits that she was once the same, however her time at Vought has changed her. She tells Starlight that she does not want to see the same thing happen to her. After Starlight is sexually assaulted in The Name of the Game by the Deep, Maeve advises her to forget about it.

Starlight admitted that she was once Maeve's biggest fan, having read her biography, cover to cover many times. Maeve saving the school bus by punching it was a huge moment for her in helping her wanting to be a hero. When Starlight learned how corrupt Vought is assumed everything about Maeve was just bullshit, however Maeve told her the bus was real, as a bone never healed in her arm after that.

Maeve ends up saving Starlight from being killed by Black Noir, after he discovered she was the traitor. When Starlight and Hughie went to see Maeve and ask for her help to stop Stormfront, Maeve grew angry. She told them that she had done enough for her already, and was tired of this life, and yelled for them to leave. Ultimately, she arrives to save Annie and The Boys, by helping them overpower Stormfront and blackmail Homelander. 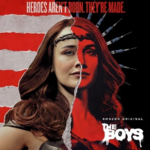 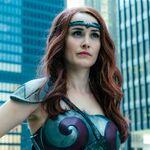