The Boys Wiki
Register
Don't have an account?
Sign In
Advertisement
in: The Boys Presents: Diabolical Characters, Supers, Female Characters,
and 2 more

For the Dynamite version of this character, see Nubia/Comics

"Don't be such a fucking pussy!"
—Nubia[src]

Nubia is a character in the animated anthology series, The Boys Presents: Diabolical.

Nubia was married to Nubian Prince but they fought all the time and eventually got a divorce.

At some point later, Nubia participated in the Vought-sponsored reality show American Hero and was known as Contestant #8. She was eliminated from the competition at a certain point, with only one actual contestant, Supersonic, going on to win a spot on the Seven.[1] 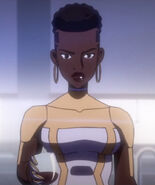 Nubia in The Boys Presents: Diabolical.

Nubia at the start of her superhero career.