An Animated Short Where Pissed-Off Supes Kill Their Parents

"Laser Baby's Day Out" is the season premiere of the animated anthology series, The Boys Presents: Diabolical. Its animation style draws inspiration from classic Looney Tunes shorts. It was released on March 4, 2022 on Amazon Prime Video. It may be an homage to the Roger Rabbit short "Tummy Trouble".

A cute baby plus laser eyes equals a heart-melting evisceration machine. Before you burn your chest. With her laser eyes.

Simon gets out of bed and goes to work at Vought International, where he is an employee. He passes the Vought-doption center before running into a security guard man who crushes his coffee cup.

Simon goes up the elevator to the lab to check in on subject # 73852, Laser Baby, in day 20 of a Power Trial. He walks in to see a cute baby greet him and he tries to run a test with her. The baby just wants to play instead of doing the test but then she unexpectedly sneezes and her laser powers accidentally cut up the room. Simon sadly walks to this office where he marks the trial as concluded and seems disappointed that his subject didn’t pass. He dreams of adopting the baby himself.

He sees the adoption board where his test baby is put on the “Terminate” list by Superbrain. Simon runs to save the baby before they can terminate her. He hides her and gives her a ball. He tries to walk out with the baby but gets stopped at security. The baby manages to crawl outside and escape.

The security guard runs after her and Laser Baby sneezes and accidentally kills the security guard. Simon runs out to follow her and finds her near the zoo. Vought security agents come to get the baby but she sneezes again and accidentally kills them all. Simon slips in their blood as he tries to catch Laser Baby himself. He steals a zoo ranger’s horse before someone starts shooting at him. Simon gets stuck in the crocodile cage and then a piranha tank before jumping out.

The baby plays with a giant gorilla who helps defend her against security agents. The baby sees a big red ball and crawls towards it, into oncoming traffic. Simon continues to follow her. A helicopter comes to shoot the baby but she lasers it down. She tries to get the giant red ball, which is really a big red circular statue on top of a building that says Jitter Bean.

Superbrain comes to try and kill the baby but she lasers half of his brain off. Simon cuddles Laser Baby and she says “Da-da”. They see dozens of security agents down below the building and Laser Baby lasers them all. They get away unscathed. 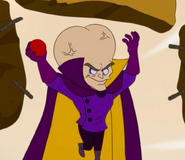