The Boys Wiki
Register
Don't have an account?
Sign In
Advertisement
in: Characters, Human, Main Characters,
and 7 more

For the Dynamite version of the character, see Hughie Campbell/Comics.

"I mean, just when you think this shit can't get any more horrible..."
—Hughie Campbell to Billy Butcher[src]

Hugh "Hughie" Campbell Jr. is one of the two main protagonists (alongside Billy Butcher) of the Amazon series The Boys, and a member of the vigilante group, The Boys.

Hughie has a mediocre life. He’s a mild-mannered guy with a boring job, who still lives at home with his Dad — in the same bedroom he grew up in. The only light in his life is the love of his life: his girlfriend, Robin. That is, until a speedster superhero named A-Train runs through Robin, eviscerating and killing her on impact. Desperate for revenge, Hughie’s recruited by anti-“Supe” vigilante Billy Butcher, and Hughie’s world is turned upside down as he finds himself caught in the middle of a war against superheroes – who, as it turns out, are neither super nor heroic.

Hughie is happy with his girlfriend Robin, and the two are in discussion to move in together. However, their relationship is cut short after Robin is accidentally killed by A-Train who is high on Compound V at the time. Hughie becomes hungry for revenge, and in The Name of the Game, he is approached by Billy Butcher who offers to help him get revenge. Hughie is first angry as Butcher disregards him after planting a bug in Seven Tower, but the two swiftly get back together after Translucent attacks Hughie. Hughie eventually kills Translucent in Cherry, leading to Butcher reforming The Boys and asking for the help of Mother's Milk.

After Robin's death, Hughie begins a relationship with Starlight on advice from Billy. Hughie uses Starlight to gain tickets to Vought's Believe EXPO in Good for the Soul in order to blackmail Ezekiel into stopping Compound V shipments. The two begin to grow closer, while Hughie struggles between his love for Starlight and his desire for vengeance for Robin. Leaving him to make an ultimatum between wanting to avenge Robin or move on and start another relationship with Starlight. Starlight initially gets angry at this and just as the two become romantically involved, they break off the relationship on Butcher's orders.

The two keep in contact, however, with Starlight demanding to know why Hughie would betray her. Hughie again uses their relationship to his own gain, asking Starlight to use her security clearance to find Naqib, a terrorist Supe. Their relationship is left on uneasy grounds at the end of season one, as Starlight intervenes to save Hughie from a high A-Train.

By Season 2, Hughie is forced to live on the run and hide underneath a pawnshop with gang associates of Frenchie known as the (Clarkson Avenue) Haitian Kings. Despite the conditions, Hughie attempts to make the most of his situation by sneaking off to reconnect with Starlight, even if is just to run errands or collect information on the Supes.

Sit This one out[]

Following Hughie's injury in the previous episode, Hughie is ordered by Butcher to stay behind and guard Lamplighter while The Boys go to work. While they wait, Hughie is uncomfortable as Lamplighter chooses to watch superhero pornographic films. Hughie expresses his discomfort but Lamplighter continuously expresses his indifference. Hughie asks Lamplighter about why he's so negative, to which Lamplighter explains that his life was destined for greatness, then he lost it all, and now he's just a guy on the sidelines, watching the real heroes do the work. Hughie tries make Lamplighter feel better by empathizing, Hughie reveals that after his mother left him, he had to watch his father do nothing all his life. Lamplighter dismisses his attempt and insults Hughie further.

Hughie has a plan[]

Eventually Hughie becomes too uncomfortable with the films and changes the channel to see a news article about Starlight's arrest. Hughie becomes anxious and pleads with Lamplighter to help him rescue her. Lamplighter however, continues to be fatalistic and states that it's pointless to try and rescue her. Hughie then attempts to appeal to Lamplighter, telling him that he be a hero once again by saving her. Lamplighter still refuses, that is until Hughie refences on of the films and asks him in his own way if he wants to stay useless or do something useful. Lamplighter nods, so him and Hughie head out to The Seven Tower.

Lamplighter and Hughie use a hidden backdoor him and Mr. Marathon used to use. From there, Lamplighter tests to see if his handprint is still in the security system, thankfully for them it is. From there, the two ride an elevator to another level. Hughie's bandaged wound starts to bleed, which encourages them to move quicker. They make it deeper into the tower, that's when Hughie realizes they're not in 42D, instead, they're in the conference room. Hughie notices Lamplighter staring at The Seven mural, remarking they moved his statue. Confused Hughie tries to ask him what he's doing, but Lamplighter ignores his concerns. Confused, Hughie watches lamplighter as he turns around and lights his lighter. Hughie freaks out when Lamplighter allows himself to be consumed by his own fire. Hughie can only watch as Lamplighter burns himself to death, causing the sprinklers and fire alarm to activate. Drenched and disappointed, Hughie runs away from Lamplighter's corpse in search of Starlight. He does quickly return to the body when he realizes he needs Lamplighter's hand in order to bypass the security lock. Hughie stomps on the wrist to break the bone, then he severs it using a broken bottle. Hughie limps his way to 42D carrying Lamplighter's hand as key. There, he hears screams for help and unlocks the cell door with the hand. Hughie realizes it's Annie's mother and they flee in search of Annie. They both bump into Annie on their way out and escape.

Enraged about Lamplighter's death, Grace and M.M both express their disappointment that Hughie got their star witness killed. Despite ridicule from his teammates, Annie thanks him for rescuing her.

At the end of the season, he and Annie reconnect and kiss. Hughie then goes to Victoria Neuman's office and asks for a job, saying that he wants to bring Vought down in the "right" way.

Seven On 7 With Cameron Coleman[]

Hughie is shown/mentioned in the July 7, 2021 segment on Cameron Coleman's show, where it is revealed he is appointed by Victoria Neuman as the FBSA's senior analyst. He is also shown/mentioned in the December 7, 2021 segment, where he and with Neuman are enjoying a Christmas party, but Coleman thinks he seems to look more like a "waitstaff" instead. Hughie eventually makes a full appearance during the segment on January 7, 2022 where he is interviewed by Coleman, but it gradually grows into a debate and is promptly cut off the mic by Coleman.

Hughie was kind, compassionate, intelligent, and timid, as hinted to during his interactions with Robin in The Name of the Game. After Robin's death, Hughie became more aggressive and desired revenge. He was plagued by anxiety after the traumatic events he endured and frequently experienced small panic attacks. Despite this, he had a strong desire to pursue his goals and help Butcher and The Boys, using his willpower to control his emotions when talking to A-Train. Hughie often let his anger blind him and cause him to make irrational decisions, as seen when he used Starlight to get a pass with Ezekiel, but his apologetic nature caused him to feel remorse for his actions.

Even though he chose to stay with The Boys instead of leaving and trying to live peacefully so he could accomplish his revenge for Robin's death, Hughie is not confortable with the lifestyle that he and his teammates lead and does not get used of constantly being in situations where he literally puts his life on the line. Just like Translucent pointed out, Hughie feels drowned in a context in wich he's unable to adapt or take the iniative on his own.

As of second season, after feeling abandoned and betrayed by Billy Butcher, alongside with the fact of becoming one of the most wanted criminals in the country being forced to hide and act more cautious, Hughie feels more desesperated, distrusfull and displeased of his situation. After Butcher returned, Hughie, reluctantly with this, seems to have calmed down a bit, but now confronts Butcher more than before.

"Look, I just need five minutes inside. I mean, home service is my specialty."
—Hughie Campbell[src] 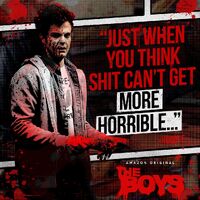 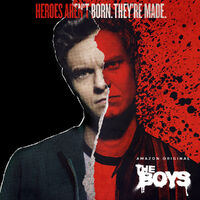