Member of The Boys

"You just dropped the Moby fucking Dick of problems on my plate. That's what I think."
—Frenchie to Billy Butcher[src]

Frenchie is one of the main characters in the Amazon series The Boys and a member of the vigilante group, The Boys.

A drug-dabbling, gunrunning jack-of-all-trades, Frenchie’s skillsets are an invaluable resource to Butcher and The Boys, but his impulsive decisions are an eternal source of frustration to Mother's Milk. Frenchie’s got a history as a killer-for-hire — and those jobs, and the human faces behind them, have always stayed with him, like scars. But he’ll rediscover his humanity when he finds a woman locked in a cage in a basement who’s part of a larger mystery, and Frenchie is the only one of The Boys who’s able to connect with her.

Frenchie's father was bipolar. One time, he tried to smother his son with a Hello Kitty-themed duvet. While living in Marseille at the time, his father kidnapped him in the middle of the night from his mother and kept him with him for years, living from one hotel to another. Every few nights, he would take him out for a walk to smoke a cigarette and tell him he loved him. However, he would also burn him with the cigarettes. Frenchie made many attempts to run away, jumping buses and trains or anything to return to his mother, but he was found by his father every time.

Frenchie is a former member of the original Boys, headed by Grace Mallory. However, after The Boys disbanded, he met Cherie, starting a relationship with her. Frenchie is approached by Butcher after Billy and Hughie kidnap Translucent. Butcher asks for Frenchie's help in hiding Translucent from The Seven, much to his initial dismay, he eventually agrees to help them.

After Translucent's death at the hands of Hughie, Butcher brings back Mother's Milk against Frenchie's wishes. Both M.M and Frenchie refuse to work with each other due to past events, but are able to reconcile their differences as they monitor Popclaw and A-Train in Get Some.

After following A-Train to an underground basement, Frenchie connects with The Female, a small woman locked in a cage. He is at first wary of the woman, who has been the subject of Compound V experiments and now has extraordinary abilities, however the two grow closer when she saves him from Black Noir in The Female of the Species.

The two grow closer, with Frenchie often being the only one who can talk to, and calm, The Female. He is saddened to learn about her history and her brother's kidnapping, offering to take her back to look for him, however she declines.

In the comic series, Frenchie goes by the name The Frenchman and is one of the two powerhouses of the Boys — the other being Female of the Species. He is described as having a strong connection with both Female and Billy, however, he has killer instincts and his anger is hard to reign in once provoked. Similar to Female of the Species, the Frenchman's use of Compound V has given him abilities such as increased strength, smell and increased durability. Frenchie was born in a small village in the Pyrenees that spoke its own unique dialect of French. When he returned from an unspecified war, he discovered that his girlfriend had been stolen by Black Pierre, his childhood rival. Frenchie's parents urged him to compete against Black Pierre in the upcoming festival where disputes are settled by the contestants jousting against each other on bicycles with baguettes. Having developed a pacifist outlook on life due to the war, Frenchie refused, so his father decided to joust against Black Pierre instead to defend the family honor. Black Pierre, however, plays dirty by jamming a croissant into the wheel of Frenche's father's bicycle. Frenchie's father was killed in the resulting crash, while his mother died a short time later from grief. Blaming himself for his parents' deaths, Frenchie killed Black Pierre in revenge and left the village. He was recruited by Butcher about a year later. Frenchie has a close relationship with the Female, and does his best to temper her murderous tendencies. Towards the end of the series, both are killed by a bomb planted by Butcher. Shortly before the bomb detonates, Frenchie confesses his love for the Female.

"I carry... I carry them all with me. It's like scars in a way, you know?"
—Frenchie to Hughie Campbell[src]

Frenchie is seemingly the most intelligent member of the group, with the widest skill-set. He is a multi-talented criminal with knowledge of many criminal endeavors, whether it's producing drugs, smuggling weapons, breaking and entering, break-ins and lying to authorities. He's so talented at the latter that he was able to flawlessly fool Homelander, despite his great power.

He seems to be psychedelics enthusiast as when Hughie is panicking about keeping Translucent as a prisoner, Frenchie offers him an LSD/MDMA cocktail to calm his nerves. In his spare time he seems to enjoy baking pastries and other French dishes and is stable enough to coach Kimiko.

Frenchie claims he carries the memory of each person he has killed with him, and in one of his conversations with Hughie he implies that he feels quite guilty about his past as a hit man. He later tells Mother’s Milk that he feels Kimiko makes him a better person, implying this is part of his motivation for helping her.

"I know a bloke. Top man. He'll know what to do."
—Billy Butcher to Hughie Campbell[src]

Frenchie claims to "know a little about a lot of things." He is a gunrunner by trade, but he has a knack for creating unique solutions to problems. 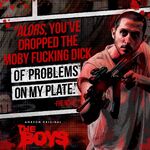 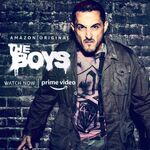 Retrieved from "https://the-boys.fandom.com/wiki/Frenchie?oldid=3441"
Community content is available under CC-BY-SA unless otherwise noted.