"You shiver when you orgasm, sir."
—Doppelganger revealing their true form to the Senator[src]

Doppelganger is a minor character in the Amazon series The Boys.

When Senator Calhoun rejects the idea of integrating Supes into national defense, Madelyn Stillwell hires Doppelganger to pose as an attractive young woman named "Rhonda" and sleep with the Senator. After restraining and blindfolding him, Doppelganger shifts back into their true form and takes pictures of themself having intercourse with the unsuspecting Calhoun in order to blackmail him into sponsoring a bill to militarize Supes.

After Stillwell's death, Doppelganger starts a perverse agreement with Homelander and uses their powers to transform into Stillwell and satisfy the “hero”’s fantasies, all the while living in a chalet, hidden from everyone else. One night, as Homelander remarks that people think he only loves himself, Doppelganger tries to pleasure him by transforming into him, but as they prepare to perform oral sex on Homelander, the supe realizes he doesn't need anyone to love him, Doppelganger included, and snaps their neck with a single hand.

Doppelganger, like most supes, is extremely smug and borderline sociopathic. They took a great deal of pleasure in revealing their true form to Senator Calhoun after they had seduced and slept with him, as he believed he had slept with Rhonda; a young and attractive woman. Afterwards, Doppelganger mocks Calhoun for apparently shivering when he orgasms.

Doppelganger also appears to be skilled at seducing others. Not only did they use this to seduce Senator Calhoun, but they also acted as Madelyn Stillwell for Homelander's benefit and knew exactly how to play along with his twisted fantasy. 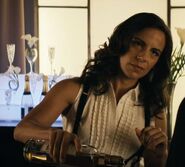