The Boys Wiki
Register
Don't have an account?
Sign In
Advertisement
in: Female Characters, Supers, Characters,
and 5 more
English

For the Dynamite version of the character, see Crimson Countess/Comics.

"I didn't love you. I hated you. We all did."
—Crimson Countess before being murdered by Soldier Boy.[src]

Crimson Countess is a character in Season Three of the Amazon series The Boys. She was a member of Payback and the former lover of Soldier Boy.

Crimson Countess was a member of Payback, a premier superhero team during their time in the 1980s. She fought alongside Gunpowder, the TNT Twins, Mindstorm, Swatto, Black Noir, and her leader, Soldier Boy.

During the November 7, 2021 telecast of Vought News Network's Seven on 7 with Cameron Coleman, a commercial for Vought Land: The Super Park played. In the commercial, the Countess could be seen singing, with the commercial's narrator explaining that the park had a particular attraction where guests could watch the Countess singing about superhero history.

Crimson Countess is working at a Vought Theme Park, performing and using her powers to amuse audiences who come to visit. She receives an unexpected visit from The Female and Frenchie, who pretend to be fans, but instead who attack her and demand to get information on Soldier Boy's death. She fights back and manages to escape. While escaping, she accidentally kills a theme park employee and sends hundreds of families and children screaming.

She is them ambushed in her fifth wheel by Butcher, Hughie and Mother's Milk, who restrain her in chains which don't allow her to bring her hands together. She panics upon learning that Soldier Boy is alive, knowing that he will kill her. Soldier Boy then arrives, furious over having been abandoned to the Russians by his teammates. When he asks her how much the Russians paid her for her betrayal, she responds that she was paid nothing; her unwillingness to attempt to rescue him was due to the fact that she hated him, not because she was paid off. She further added that "we all hated you."

Soldier Boy then releases his energy discharge which destroys the Crimson Countess's home and reduces her body to a smoldering skeleton. 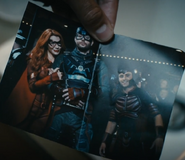