The Name of the Game

The Boys get themselves a Superhero, Starlight gets payback, Homelander gets naughty, and a Senator gets naughtier.

Billy takes Hughie to see Frenchie, who questions why Billy has come to see him, given that he owes him $40,000. Billy shows Translucent to Frenchie, who worries that Homelander could be on his way.

A-Train visits a cancer-stricken teen boy in hospital, which is fed onto Facebook via live stream. The boy is unhappy, because he asked to meet Translucent, not A-Train. A-Train boasts that he is the fastest man in the world, leaving no impression on the boy. At Seven Tower, Madelyn Stillwell and Ashley Barrett discuss Translucent's location. Ashley says that she does not know his location and he hasn't triggered any of the motion sensors in the building.

Starlight introduces herself to Black Noir, but he walks on without interacting. Ashley asks how she is settling in and tells her that she is being sent on her first patrol. Starlight says that she prefers to do her own investigations, and is shocked to find that the Deep is also on the patrol with her.

After covering the walls and ceiling with foil, Frenchie, Billy and Hughie trap Translucent in an electrified cage in the basement of a boarded-up restaurant. Frenchie is annoyed that Billy has burdened him with this problem. He says that Translucent's skin is impenetrable, making him hard to kill. Hughie is shocked to hear that they're thinking of killing Translucent.

Homelander questions Madelyn as to whether she has located Translucent, offering to search for him himself. Stillwell says that that is not necessary. Madelyn asks whether Homelander heard about the Mayor of Baltimore, questioning whether he had anything to do with the incident. Homelander says that he heard the Mayor blackmailing her. Homelander wonders how the Mayor even knew about Compound V, but Madelyn tells him to keep quiet.

Hughie receives numerous missed calls from his father. When he returns the calls, his father expresses concerns about what happened at the AV store. Hughie's father asks him to come home and be sensible.

Homelander and the Deep meet at Seven Tower. During the meeting, Homelander questions why the Deep ran to Stillwell and revealed what he saw on the Mayor's plane. Homelander uses the meeting as a pseudo-threat, telling the Deep that the conversation should never happen again, to which the Deep fearfully agrees.

Frenchie works on creating a bullet coated in the same material of Translucent's skin, in hopes that it will be enough to penetrate his skin and kill him. Billy fires the shot, however, it bounces off his skin, and Translucent laughs, cheerfully claiming that he's invincible and it is only a matter of time until The Seven come for him. Unnoticed, the bullet damaged the foil shielding on the ceiling.

At Seven Tower, due to the damaged foil, the team are able to find Translucent's locator within a ten-block area. Madelyn sends a security team, telling them to search door to door if necessary.

At the docks, the Deep and Starlight investigate the case handed to them by Ashley. The Deep is angry that he has been handed low-level cases, believing that he could be so much more. Starlight lashes out over what happened the previous night. The Deep scoffs at her hurt feelings. Starlight reveals that she found out that he is not number two in The Seven, but is laughed at by everything and is 'just the fish guy'. The two apprehend a series of thugs smuggling pills through the docks, ironically hidden in Homelander toys. Vought uses the bust as a publicity opportunity, which shocks and annoys Starlight.

At her house, Billy lies in wait for Susan Raynor, deputy director of the CIA, congratulating her on the promotion and asking to see some of her files, including Translucent. Raynor questions why he wants to see the file, and Billy admits that he's looking to kill him, and perhaps could find something in the files. Raynor, however, says that the files are buried, and even she will not dig them up. There is strong sexual tension between them.

Hughie questions Translucent on Robin's death. He asks where A-Train was going in such a rush, saying that he knows they were tight. Frenchie notices a truck pull up, grabbing his gun. Translucent says that he can read Hughie, who is scared and in over his head. Despite the truck driving off, Vought security forces poke around the building, but leave before noticing Frenchie and the others.

At a Vought fundraiser, Madelyn meets with the Senator, saying that nobody will put Supers into national defense. He says that nobody wants to outsource, as America runs on weapons — he does, however, say that he'd be scared to have Homelander on the front line. He expresses concern that the heroes belong to Madelyn.

Walking home late at night, Starlight saves a woman from being raped by two men, beating them up. Unbeknownst to her, the scene is being video-recorded.

Frenchie tries, unsuccessfully, to kill Translucent. He tries to offer Hughie MDMA and LSD to calm him, which Hughie refuses. Frenchie reveals that he works in quite a few fields, but is a gun-runner by trade. He says that for the most part, he tries to figure out ways to kill Supers. Meanwhile, The Senator is tricked into having sex with the shapeshifter Doppelganger, who takes advantage of him, taking incriminating photographs after shifting into a male.

Ashley questions Starlight over the footage of her beating up the men, revealing that she has blown her secret identity. Ashley says that there is no woman in the video, and all the video shows is Starlight beating up two innocent men. Ashley says that Starlight must have meetings with legal and crisis management following the outburst. Stillwell meets with the Senator, revealing two photographs from the previous night. Stillwell says that she knows he had sex with Doppelganger, and she plans to use the photographs to blackmail the Senator about national defense.

Frenchie realizes that Translucent has a tough shell, like a turtle, but his insides are like those of a normal human. After rendering him unconscious, Frenchie reveals that he has stuck a bomb in his rectum that can be triggered by remote detonator. Translucent begs for his life, saying that he knows information about where A-Train was going the night of Robin's death. He reveals information about Popclaw, A-Train's girlfriend. Frenchie says that Homelander is nearby, which frightens Hughie. Frenchie warns that pulling the detonator will alert Homelander to their location. Homelander confronts Frenchie, while Translucent escapes from his cage but is threatened by Hughie. Billy remotely triggers an explosion at Frenchie's place nearby, drawing Homelander to investigate. In the basement, fearing Translucent would wreck everything, Hughie presses the detonator, blowing Translucent to pieces. 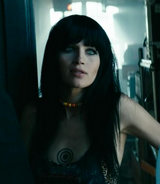