The Boys Wiki
Register
Don't have an account?
Sign In
Advertisement
in: Comic characters, Supers, Male Characters,
and 5 more
English

The Boys #65 - Over the Hill With the Swords Of a Thousand Men, Part 6

For the Amazon version of the character, see Black Noir.

"Told me. To kill you. But they wouldn't let me do it, wouldn't say do it, wouldn't say. So lonely. So scared. So excited. For so long. Got the little people, got your silly suit, got my camera. Then I got my pictures but it's scary. So big so scary. Keep my pictures, keep them then we hear about Him. Send him my pictures. He knows what to do. Hheeeennnhh."
—Black Noir gleefully revealing to Butcher and Homelander that he was the one who raped Becky and then framed Homelander for it.

He is a silent and emotionless member of the Seven. He is the true mastermind, for the rape of Billy Butchers' wife, Becky and the sexual assault on Hughie's girlfriend, Starlight, as also the second archenemy of Billy Butcher.

He served as the secondary antagonist throughout the series, until revealing he was the rapist of Billy's wife, Black Noir is one of the two main antagonists of the series, since Homelander had nothing to do with raping Billy Butcher's wife.

Black Noir is an identical clone of Homelander created by Vought as a fail-safe to kill Homelander if he ever overstepped his bounds. However, years passed and Black Noir was unable to fulfill the one purpose he was created for. He grew increasingly more psychotic as he waited to fulfill his purpose. Black Noir then decided to fabricate his own situation, by framing Homelander for various crimes, including rape and cannibalism. This made Homelander lose his mind and start a Superhero uprising. Eventually at the White House, Noir revealed his true purpose to Butcher and Homelander. Homelander snapped, but Noir overpowered and killed him. Still, though victorious, Noir received heavy damage from the former friend's rampage, remaining disemboweled, without part of the skull and heavily burned all over his body. The US military intervened, attacking him with tanks and gunfire, furtherly damaging him and, by doing so, allowing Billy to literally crack open his skull with a crowbar and crush his brain to finally kill him.

Black Noir is a man wearing a black skin tight suit. Behind his mask he looks nearly identical to Homelander, having his blonde hair, fair skin, and blue eyes.

On the outside, Black Noir is silent, stoic, and utterly unemotive. However, beneath this veil of silence is a stone-cold psychopath who delights in every form of depravity imaginable, including rape, cannibalism, torture, manipulation, murder, and more. He is unstable, as when he was revealed for what he truly was, he was gleeful, boasting of what he did to manipulate and frame Homelander, and otherwise accelerate events so that he may fulfill his primary purpose for existing and killing the rogue superhuman. 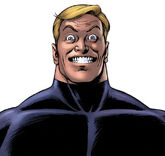