The Boys Wiki
Register
Don't have an account?
Sign In
Advertisement
in: Characters, Male Characters, The Seven,
and 5 more
English

Edit
watch 01:40
Boba Fett Returns - The Loop
Do you like this video?
Play Sound

For the Dynamite version of the character, see Black Noir/Comics.
"..."
—Black Noir to anyone.

Career as The Seven member[]

Using his explosive power, Naqib attempts to kill Noir, but Noir easily survives and beheads Naqib. Still carrying Naqib's head, Noir encounters Naqib's son as he leaves. Noir picks up the son's teddy bear/bunny and briefly plays with it to entertain the son, then places the bear/bunny back onto the bed and leaves.

A Butcher to Slaughter[]

When Vought tricks Donna January into luring Starlight out, Black Noir is sent to capture them both. Everyone at the cafe is knocked out with gas, while Noir enters and knocks out Starlight with brute force. Black Noir appears one more time, where he attacks Starlight while she's attempting to escape. Noir apprehends Starlight and begins choking her, however before she blacks out, Queen Maeve intervenes and pulls Noir off of her. Maeve then lifts up Noir's mask and force feeds him an Almond Joy, taking advantage of his severe tree nut allergy. Noir, entering an anaphylactic shock, struggles and reaches for an EpiPen on his person but Maeve throws it aside to buy themselves long enough to escape. Maeve and Starlight run off leaving Noir crawling for his pen.

Despite showing the capacity for compassion towards others, Noir shows he has no hesitation when it comes to using deadly force to take out targets. Additionally he can become extremely ruthless when on missions, such as tearing a mans head appart to stop him from screaming, cutting Naqibs head off and violently strangling Starlight after brutally beating her for several minutes.

Black Noir is apparently mute, but this may not be the case. In the first episode, during a meeting of The Seven, Homelander calls for the various members to share who they saved this week, asking Black Noir to begin. Although Black Noir's testimony (whatever it may have been) was not seen in the episode, it would suggest that Black Noir can speak when called upon to do so. Although it is also possible that he uses some other form of communication that the remaining members of The Seven can readily understand. Still when he was force feed an Almond Joy by Queen Maeve he was able to produce several weakened groans, further suggesting his mutism is more a conscious choice than a disability. 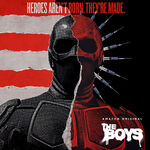