The Name of the Game

"A multi-billion dollar global industry supported by corporate lobbyists and politicians on both sides. But the main reason that you won't hear about it is 'cause the public don't want to know about it. See, people love that cozy feeling that Supes give them. Some golden cunt to swoop out of the sky and save the day so you don't got to do it yourself. But if you knew half the shit they get up to... ooh... fuckin' diabolical. But then... that's where I come in."
"Come in to... to do what?"
"Spank the bastards when they get out of line."
—Billy Butcher and Hughie Campbell[src]

William "Billy" Butcher is one of the main characters in the Amazon series The Boys.

A former C.I.A. operative turned vigilante, Billy Butcher is as charming as he is cunning. He’s a force of nature, who can talk almost anyone into anything, either through a smile or brute force – or sometimes both. He’s consumed by one mission in life: to destroy superheroes. But this personal vendetta is driven by his hatred for one Supe in particular: Homelander. Butcher’s determined to get revenge on Homelander, no matter the cost. And he won’t let anyone or anything stand in his way.

Following the revelation that Becca is alive, Butcher faces a difficult decision when he must choose between searching for Becca or protecting the security of the Boys.

Butcher is a former Federal agent. He was present at Gitmo, where he had to waterboard Khalid Sheikh Mohammed 183 times over six months to get him to talk just once.

Butcher's initial goal is to gather up The Boys and go after Vought International — most specifically, take down Homelander, whom he is under the impression killed his wife. In The Name of the Game, Butcher approaches Hughie Campbell after the death of his girlfriend Robin Ward at the hands of A-Train. Billy asks for his help in securing a bug in Seven Tower, to which he obliges.

After Translucent finds the bug and attacks Hughie, Butcher saves Hughie and kidnaps Translucent. With nowhere to go, he seeks out the help of old-friend Frenchie. Frenchie is at first angry that Butcher has come to him, however the two reconcile and end up figuring a way to kill Translucent; Hughie is the one who ends up pulling the trigger, however.

Shortly after Translucent's death, Butcher approaches another old friend, Mother's Milk, asking him to join The Boys again. Mother's Milk initially refuses, however is convinced by Billy to come back. Not long after, in The Female of the Species, The Boys find The Female in a basement, having been the subject of Compound V injections for a while. She is ultimately accepted into The Boys despite Butcher believing her to be initially dangerous.

Billy's hate for Supes has been fueled by his personal hate for Homelander, leader of The Seven, following the alleged death of his wife Becca Butcher. Shortly after his wife's disappearance, Grace Mallory approached Butcher, showing him CCTV footage of his wife and Homelander together at Seven Tower. Billy believed that Homelander was the reason she disappeared, presuming that he killed her, fueling a personal vendetta that would last the next eight years.

Unbeknownst to Billy, Becca had been placed into witness protection by Vought International having been pregnant and given birth to Homelander's child — a child with enhanced abilities, including Homelander's heat vision. In You Found Me, Homelander takes Butcher to see Becca for the first time since her disappearance.

In the comics, Billy Butcher is the leader of the Boys and a feared man around the world — including the Seven. A native of London's East End, a former Royal Marine, and a Falklands War veteran; Billy has a personal vendetta against all superheroes that stems from the rape and death of his late wife, Becca. At the time of her death, she had just given birth to a premature superhero baby who attacked Billy the moment they met. He was forced to kill the child. He is described by Mothers Milk as a calculated man shaped by his childhood. He blackmailed Homelander with photos that supposedly show Homelander committing several atrocities, including cannibalism and rape. This ultimately backfires horribly, as Homelander doesn't remember committing these atrocities and is slowly driven insane by them. This culminates in Homelander staging a coup and killing the president. When Billy confronts him, Homelander reveals that he has no memory of the events taken in the photos. It is then that Black Noir comes in and reveals he is a clone of Homelander and that he framed Homelander for several atrocities, including the rape of Becca Butcher, just to have an excuse to kill him. After a vicious fight, Black Noir does manage to kill Homelander, but not without being severely injured himself. He is then brought down by the U.S. Military and finished off by Butcher, who finally gets revenge for the rape and death of his wife.

This does not mark the end of Butcher's crusade, however, as his ultimate goal is to rid the planet of Supes entirely. He plans on achieving this by detonating hundreds of bombs and releasing a cloud of an explosive Compound V strain, that can be detonated remotely by tuning the device to a certain frequency. With Vogelbaum's help, this strain was modified to target those with Compound V in their blood, meaning that millions of people would potentially die, innocent or otherwise. In pursuit of this goal, Butcher kills Mother's Milk, Frenchie, and The Female, leaving Hughie alone to stop him. During their confrontation, both Hughie and Butcher tumble off the side of the Empire State Building, falling several stories below. While Hughie's leg is impaled on a fence, Butcher breaks his neck and is paralyzed. With his plan a failure and after a lengthy conversation, Butcher goads Hughie into killing him by falsely claiming that he murdered Hughie's parents.

"All right, listen, I have worked for the Feds. I've worked for loads of people. I'm what you might call an independent contractor. You got a problem, you call me, I solve the problem."
—Billy Butcher to Hughie Campbell[src]

"Goes to show you, doesn't it? The bollocks people will believe if you get them scared enough."
—Billy Butcher to Hughie Campbell[src]

"Y-You are pretty darn impressive. I mean, especially for, you know, one of you. See, even now, most people standing where-where you are would be pissing their pants terrified, but you... uh, sure, y-your heart's pounding, but you're not afraid. It's anger. That's a new one for me."
—Homelander[src] 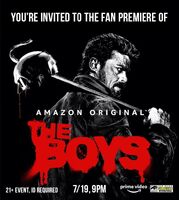 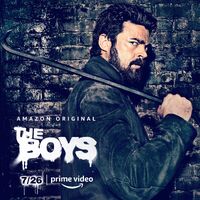 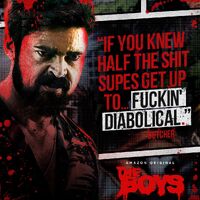 Add a photo to this gallery
Retrieved from "https://the-boys.fandom.com/wiki/Billy_Butcher?oldid=3638"
Community content is available under CC-BY-SA unless otherwise noted.