Anika is a recurring character in the Amazon series The Boys. She works for Vought International as an analyst in Crime Analytics.

Anika is first approached by Stillwell in Cherry, Stillwell asks if they have located Translucent. However she reports they've had little success. Stillwell then tells her to be discreet.

Anika does reappear in Nothing Like It in the World where Black Noir appears in front of her and demands information on Billy Butcher. Anika is hesitant and shows him Butcher's last known position and then assures him her team is searching. Noir silently intimidates Anika into searching now. Anika complies and begins searching for Butcher, Noir then sits down right next to her and oversees her progress. Eventually Anika finds footage of Butcher climbing the wall to Becca's house and this leads Noir to hunt down Butcher.

She is terrified of Vought International super heroes and executives. 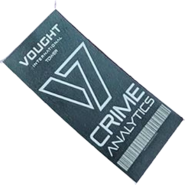 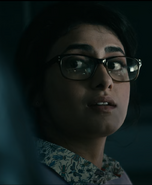 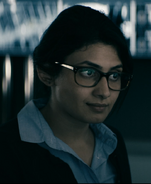 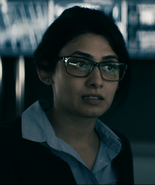 Add a photo to this gallery
Retrieved from "https://the-boys.fandom.com/wiki/Anika?oldid=10876"
Community content is available under CC-BY-SA unless otherwise noted.