For the Dynamite version of the character, see A-Train/Comics.

A-Train (real name Reggie Franklin[1]) is one of the main characters in the Amazon series The Boys. He is a speedster who used to be a part of the teams known as the Teenage Kix & The Seven. He inadvertently killed Robin Ward (Hughie Campbell's girlfriend) with his powers while high on Compound V. The one event kick-started the events in the series, by creating a vengeance against superheroes in Hughie, and Hughie's involvement in The Boys.

A-Train is a former member of The Seven and the current "fastest man in the world" but underneath the cavalier exterior of a celebrity superhero, lies the soul of a mortal athlete with a deep insecurity about staying at the top. He’ll do whatever it takes to remain in The Seven, because he knows it’s only a matter of time until a younger, faster challenger takes his place — and that’s a problem even the fastest man in the world can’t outrun.

A-Train has a history of abusing Compound V — a chemical substance engineered by Vought International — to ensure he is the fastest speedster in the world. This abuse, however, comes at a price when he accidentally kills Robin Ward, by running through her. Vought covers the incident up, however at a press conference revealing that A-Train was attending a bank robbery. Vought offers Hughie Campbell compensation for A-Train's mistake, but Hughie is reluctant to take it, turning to Billy Butcher and The Boys for revenge.

A-Train's abuse continues, however, as his race with Shockwave approaches in Get Some, he juices up again despite warnings from girlfriend Popclaw. The Compound V ensures he is, yet again, the fastest speedster on Earth, gaining positive publicity for Vought. Despite warnings from Vought and his brother, Nathan, A-Train abuses Compound V yet again to heal his leg after an encounter with The Female, which leaves his leg shattered. Eventually in You Found Me, the abuse takes a toll on A-Train. Leading to him having a heart attack while he is fighting Starlight and Hughie. A-Train is first seen in a hospital bed recovering while Starlight oversees his recovery until he surprises her later on, seemingly making a full recovery. However later into season 2, it becomes apparent his recovery was not complete, as A-Train now suffers from intense heart palpitations every time he speeds up. These health issues would be noticed by Homelander. In Nothing Like It in the World, Homelander personally kicked A-Train out of the Seven due to his heart not being able to withstand his super speed and prompted to replace him with Shockwave.

A-Train's relationship with Popclaw is rocky, with him refusing to ask for Madelyn Stillwell's permission for them to take the relationship public. She is against his continued use of Compound V, warning him that he does not need it to be the fastest out there; something she refuses to admit, however.

The relationship between the two becomes strained after Butcher and The Boys blackmail Popclaw into revealing information about A-Train's Compound V runs — information that eventually leads to multiple deaths. A-Train confronts Popclaw, asking who she revealed the information to, however she is reluctant to admit. After the two relocated, a distraught A-Train murders Popclaw in Good for the Soul in order to ensure Compound V remains a secret. Despite his efforts to keep Compound V a secret, Starlight would later blackmail A-Train by threatening to exposing him as a murderer if he didn't allow her to expose Compound V to the public.

After suffering from a heart attack at the end of You Found Me, A-Train is first seen in a coma recovering. A-Train does awaken, however his recovery was not perfect, as he now suffers from intense heart palpitations. A-Train then is shocked when he sees Shockwave at The Seven tower, enraged, A-Train confronts Ashley. To which Homelander enters the office and announces that A-Train is out of The Seven due him no longer being able to run at super speed without heart problems and that makes The Seven look weak if The Seven's Speedster isn't in the top 20 anymore. A-Train reappears to participate in the upcoming movie, Dawn of the Seven in We Gotta Go Now. A-Train is reluctant to say his line where he admits that he is leaving the Seven, however the director (Adam Bourke) ignores his suggestions to make his line sound more ambiguous and Ashley threatens him with an ultimatum: Say his line and leave The Seven with his dignity and paycheck intact, or he can be fired and have Vought expose his Compound V abuse and overdose to the public. A reluctant A-Train ultimately decides to say his scripted line in the movie that he is leaving The Seven finally to "stop running" (possibly indirectly stating he's retiring).

Once all is said and done, the Deep arrives at the movie set in The Bloody Doors Off, while there he attempts to recruit A-Train as a member of The Church of the Collective. A-Train denies the offer, stating his life is going good without it, however he becomes interested when The Deep tricks him by stating "I guess you don't need his help then". A confused A-Train asks whose help, The Deep turns around offering him a Fresca. A-Train then has lunch with The Deep and Alastair Adana at the renewal center. Alastair asks them both about their thoughts, Deep reveals he thought A-Train was jealous of him, so the former wanted to drown the latter for the longest time but Deep also admits doesn't want to feel that way anymore. Freaked out, A-Train attempts to leave but stops walking once Alastair reveals that he knows the truth about A-Train being kicked out of The Seven, A-train's heart condition and A-Train's Compound V abuse. Confused, A-Train asks Alastair how he knows about all that information, but Alastair only says "The Church knows all kinds of things." Alastair then states Vought will turn Shockwave into the next A-Train, give him his uniform, give him the name "A-Train". A-train denies that, but Alastair counters with "Why Not? 'A-Train' is a trademark. You are just another nobody form the South Side of Chicago." Alastair then offers to help A-Train get back into The Seven, but first he must let Deep tell his truths. A-Train sits back down at the table to the excitement of Deep and Adana.

In the comics[edit | edit source]

In the comic series, A-Train is a speedster and a close ally to Homelander; he was recruited by The Seven after leaving Teenage Kix, as a replacement for Marathon, the group's original speedster who was killed on 9/11 when The Seven botched a plane rescue. He first appears after accidentally killing Hughie Campbell's girlfriend while chasing a criminal. As a member of the Seven, he is kept in check by Homelander after harassing Starlight. Despite having superhuman speed, he has little control over his abilities. Due to being a newer member and because of his immaturity, A-Train is not respected by the rest of The Seven, with his only real friend being Jack from Jupiter, whom A-Train later sides against when Jack is blackmailed. He is killed by Hughie for Robin's death and after it revealed he and the Seven only hired Starlight to sexually assault her.

"Maybe I can't turn invisible, but I am the world's fastest man. Like, I can outrun anybody or anything."
—A-Train to Colby[src]

Like most "heroes" A-Train is self-centered and mostly interested in fame, fortune and publicity rather than helping others.

He has been shown to be extremely careless as he kills Robin Ward, by running through her albeit accidentally, however there are hints throughout the series that A-Train has caused this kind of incident before become desensitized to it. He later even joked about this incident to a fellow "hero" laughing at Robin's death showing him to be a very callous individual. Although he personally apologizes to Hughie for killing Robin, he is unable to recognize Hughie, even after being shown a photo of him, indicating that he did not truly care.

The only person A-Train truly cares about is his girlfriend, Popclaw. However, their relationship is a very strained one with A-Train focusing more on his career as a member of the Seven and maintaining his title as the World's fastest man. Things take a turn for the worst when she is blackmailed into revealing information on Compound V and A-Train is "forced" to kill her in order to ensure the security of his position on the Seven. While A-train does feel some form of remorse about her death, he ultimately blames Hughie for "forcing" him into that position.

A-Train is determined to maintain his status as the fastest man alive. As a result, he uses the drug Compound V to further amp up his powers. This leads to his downfall as he later suffers from a heart attack, ultimatley being the reason for him getting kicked out of The Seven. 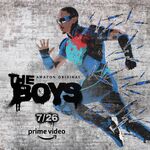 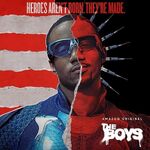 Retrieved from "https://the-boys.fandom.com/wiki/A-Train?oldid=7419"
Community content is available under CC-BY-SA unless otherwise noted.